I love the idea of New Year’s Resolutions. The excitement of a new year. The renewed promise of a better you. The hope to succeed in a new course of action.

What I hate about them is the doubt and cynicism that surround resolutions. The “Oh, so you’re giving up” look you get when you finally break down and have a cookie mid-January. Striving to improve shouldn’t be shrouded in imminent failure.

Resolutions aren’t the only time we see such an upsurge in expectations followed by a humdrum of disappointment. This also happens whenever a new technology is launched. Don’t believe me? Well, believe Gartner, founder of the Hype Cycle model (see below). You may have heard of it, but if not, take a look because it’s a predictable path that most technology launches follow. This may bring to mind the Technology Adoption Lifecycle model, with it’s bell curve of innovators, early adopters and laggards. 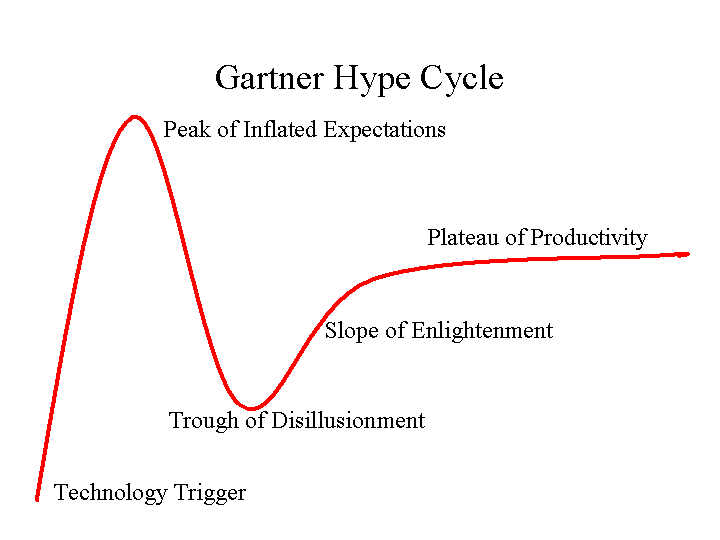 Just look at those names: the “Peak of Inflated Expectations”? “Trough of Disillusionment”? Having fun yet? Despite it’s pessimism, this model holds true pretty well.

Rather than look at an incremental launch, like iPhone 5 vs. iPhone 4S, let’s look at Twitter as an example. With no real predecessor, Twitter was disruptive as an early entrant to the emerging social media space already dominated by Facebook. There was excitement, coverage and real promise to change the way we communicate online. But what happened? Not much. For a while. (Insert “Trough of Disillusionment.”)

And just as we started wondering if Twitter would soon occupy the social media cemetery already housing MySpace, it started to make a comeback. Bolstered by a committed base (insert “Slope of Enlightenment”) that found real value in Twitter, their numbers began to climb. Twitter incorporated new and user-suggested features, like the @, the # and later adding images to tweets. All the while staying true to their 140-character beginning. And we continue to ride Twitter’s “Plateau of Productivity.”

Few moments are as full of hype as the Consumer Electronics Show that took place just last month. Each year we see amazing things from self-driving cars to paper-thin tablets. But few innovations achieve commercial success, or see even limited adoption.

So how can brands be better prepared to launch new technologies while avoiding the “Trough” and maybe bringing in a larger “enlightened” few to carry their flag? Here are some thoughts.

Henry Ford once said, “If I had asked people what they wanted, they would have said faster horses.” This is especially applicable today, where technology is often far ahead of consumer need. But just because consumers don’t know they need it doesn’t mean you don’t have to tell them what need your technology solves. In fact, it’s even more important to show consumers how your technology can fix a problem, or enable a new capability that consumers haven’t even considered yet. After all, marketing is defined by the mantra “Find a need, fill a need.” So start with need.

2. Be clear—even if that means pushing off existing technology

This is especially important if the technology is truly disruptive—meaning that consumers have no frame of reference for it. Imagine launching the pen (yes, that thing that you used before you started typing everything). How would you tell someone about a pen when they had no idea what it was? Well, maybe you’d start with this: “A pen is like a pencil, but it writes in ink instead of lead.” (Head nod.) “And what’s good about a pen is that it’ll last longer than pencil and won’t smudge.” (Bigger head nod.) That’s much more clear to people than just saying, “Pens are going to change the world. Buy a pen.” Remember, consumers need to understand what technology is before they can imagine how it can help them. So be clear.

Ah, my favorite. Let’s go back to the Twitter example. They stayed close to their users, listening to suggestions and feedback that helped them improve their product. If you do nothing else on this list, listen. Listen to you customers. Listen to your competition. Listen to your market. This doesn’t start when you launch. Start listening when you first have the idea. Share it. Get feedback. Build a prototype. Show it to people. Listen to what they say. Listen to how they talk about your product. Then speak in their voice. Accept that this might change how YOU talk about your technology. But the closer you can be to the voice of your customer, the easier it will be for your customer to understand you.

Don’t feel bad if you find yourself battling “Inflated Expectations” or in the “Trough of Disillusionment.” The great part about technology is that you have the opportunity to make it right in the next generation. I don’t mean reincarnation. I mean the next version of your product. Whether it’s a hardware of software update, by listening to your customers and your market, you can understand where your 1.0 fell short. If customers had higher expectations that you didn’t see coming, address them in your 1.1, 1.2 and so on. And get it in their hands as fast as possible (e.g., Apple Maps). By staying in touch with your customers, trying new things, and making small, incremental bets you can dig yourself out of the “trough”. This near-constant iteration together with consumer insight can provide the “test and learn” approach to make your technology more responsive to consumer and market needs. The moral of the story: you may not be able to satisfy your customer today, but you can give them what they asked for today, tomorrow.

Paula is an Experience Planner at DMI. New to DC, Paula is among a minority of Bostonians to escape the commonwealth without an accent. She aspires to be out-of-pocket.