The best and worst app reviews

A few times a year we produce a really silly app for a client or as a joke. Here’s a short selection and some of the worst we’ve done over the past 6 years:

Cippi
In 2007 it was Cippi the Farting Chipmunk with the following great description:
“Enjoy the soothing ice blast of Cippi! Plan Cippi blasts on your friends – work mates, your boss! Make sweet music. Essentially it’s the farting machine on your mobile. Download the trump selecta to your phone for free.”
The app resulted in over 8 million downloads and was awarded immature app of the year. The review says it all: “I find it hard to understand what compelled the developer of Cippi The Farting Chipmunk to create this free piece of software.”
Getjar

DogTalk
Inspired by Japanese Bowlingual (translated dog barks to human language) we created an app that translates human language into dog language. Some of the comments:
“Useless app. My dog just stared at me quiet and did nothing.”
“I said hello but the dog just barked at me.”
“I said “chowder lay down” and he did…my kids thought it was fantastic! Thats all that matters..:)”

The really big button that doesn’t do anything…
This app is without a doubt one of the worst apps ever produced. It got 20.000 downloads in the first day for an app that does absolutely nothing. Comments include:
“I think there’s something wrong with the Really Big Button. It doesn’t seem to do anything”
“It’s not true that the app doesn’t do anything. I pressed the button and my stereo fell off the bureau, practically killing my cat! I don’t know how you did this but I’m not going to press it again, thats for sure.”
“It’s a useless button. Why I just paid sixteen bucks in charges just to see it is beyond me. Can I get a refund?”
Mobile9 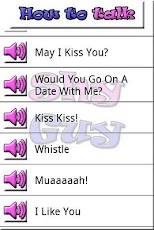 Shy guy
There flirting apps, dating apps and then there is Shy guy. This app will help you talk, seduce and charm women from all over the world. Includes: Pick up lines, the ultimate song list and insider tips about women across the globe. With 120 downloads and not a single review it must be one of the biggest app flops ever and we thought it was a pretty cool concept.